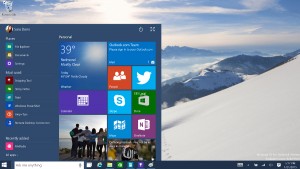 With over 75 million installs and counting in just a few months, Windows 10 is here to stay. So what’s the verdict so far?  Most say this is the best since Win7.  But that begs the question. Win8 was almost universally dismissed as, well, you know, a critter that barks.  8.1 was a step in the right direction and wasn’t hated – even garnering some positive reviews. So how does Win10 stack up? Hopefully, what we’re hearing (or saying) is that Win10 is as good as, or better than Win7.

As we mentioned earlier, of course, Windows 10 is free to (non-pirated) Win 7 and 8.1 users for a year.  Can’t argue with that.  Other pluses include universal apps – a huge step for Microsoft, who now embraces cross platform applications and compatibility for all device forms.

Cortana, the Windows answer to Siri or Google Now, is a welcome plus. Desktop users can now perform calendar updates, system searches, open a new email and such; all with simple voice commands.

DirectX12 for gamers and Xbox One streaming are unique offerings now included in Windows 10.

Microsoft’s included new Edge browser is said to be leaner and meaner than Explorer  (how could it not).

Generally, Win10 is said to impress and is a much smoother road trip than earlier versions.  Specific features and tips on actually using the new OS can be found at Cnet.

So What’s Not to Love?

For starters, this kind of massive release also comes with bugs, driver incompatibilities – and a lot of little nasties. There have already been several updates within a month or so of release,  and a huge download is imminent.

Microsoft has insisted on mandatory updates, unlike earlier Windows version that let users choose their update compliance.  It’s a sticky issue with consumer and business customers alike. And while Microsoft provided an early work around, it remains to be seen how Redmond will handle the issue on a permanent basis. So watch for updates on the issue.

Privacy is another hotbed issue.  A Win10 install defaults to sharing most anything and everything on your computer with Microsoft.  While privacy is a universal issue, it’s particularly disconcerting when it comes to your personal PC (or device) which likely contains your most intimate and sensitive personal and financial information.  Computerworld, however, thinks the Windows 10 privacy issue is way overblown, or at least no more invasive that all the other devices we use. The privacy issue is one to watch, especially if you’re paranoid about such things.  The issue has become a media storm, causing Microsoft to issue a response from Redmond.

In all, If you are a consumer and looking for a Windows computer you might want to wait a bit to let early, critical updates and bugs get resolved  —  that is, if you can. For the most part, new PCs are pre-installed with Win8.1 with a free upgrade path.  But do you want to start life with a brand new install on a brand new machine?  Some will feel it’s no problem.  Others may prefer to wait.  Soon you will find Win10 more stable and pre-installed on most new machines – perhaps a more appealing path.

So, in short, if your current PC or laptop hasn’t flat-lined, it makes sense to wait a bit until the wrinkles are ironed out, and your new PC or laptop actually arrives with Win10 installed and ready to go.