If you thought Virtual Reality was for gamers, you‘d be right.  And sure, games will become more awesome and engaging, but good money says the immersive experience of VR may well represent what will become a universal, transformative technology in medicine, sports, film, business and all aspects of our lives  . . . Read more and see some clips! 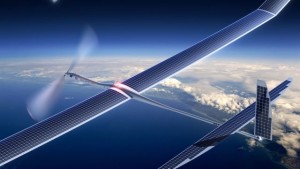 With two-thirds of the world still without internet access, have cell towers reached the end of their technological lifespan?  Google is working to find a better way.  Project SkyBender, a Google Project testing high flying drones, wants to provide universal Wi-Fi access at 5G speeds.

If successful, Skybender would use millimeter-wave transmission, a technology that can provide gigabytes of data per second, or 40 times more data per second than 4G Lite.  High altitude drones would make cell towers obsolete and deliver internet access around the world.  Project Loon, another Google endeavor, would utilize a Wi-Fi balloon network traveling at the edge of space. Read more at The Guardian, ArsTechnica, Google (Loon)

For about one skinny minute, Ved made history; well sort of.  But, alas, it was not to be for long.  Read more

Mark Zuckerberg Now the Sixth
Richest Person in the World

At 31, Mark Zuckerberg has a lot to smile about.  He’s worth about $47 billion,  according to Bloomberg.

Stuck inside and looking for love?  It seems singles found a way to pass the time by visiting online dating sites. Visits saw huge spikes — for instance, 139% in NYC and an increase of 342% in Philadelphia for Happn the popular dating site.  CNN has the scoop

Is It Time to Think
About the Cloud?

By 2020, it’s predicted that 78% of U.S. small business will have fully adopted cloud computing –
double the rate today. About 81% of U.S. Companies with 100-plus employees are using cloud based applications.  About 18% of companies with up to 99 employees are adopting a hybrid cloud environment – one that uses both a private and a public cloud.  More at Forbes and ChannelPro Network

Among top trends, according to Gartner is “digital mesh.”  As our lives become increasingly connected to various devices we’ll see greater cooperative interaction and significant development in wearables, and virtual reality. Information preservation across devices, time and space will become more synchronized. Other trends include advances in 3D printing, dedicated information analytics, and “intelligent” machines that alter behavior.  See the entire list here

A frequent target of hackers, the plug-in won’t be included in the next Java Developers Kit.  Native HTML5 development technology is one alternative.More at TechNewsWorld