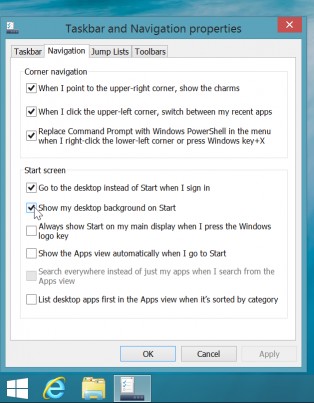 It’s kind of ironic that Microsoft managed to annoy nearly everyone with Win 8, and has now spent the past year compensating for the havoc it wreaked. This is not to say there aren’t some real improvements in 8.1. Most reviewers feel it’s a positive upgrade (free) that helps correct a confusing interface and adds some new features.

For many however, the return of the start button reigns supreme. More importantly, perhaps, is the ability to boot to desktop with a simple point and click.

Other improvements include a baked-in Sky Drive, faster shutdown, IE 11, a more unified smart search with Bing, and the ability to resize app tiles, to name but a few.

Will this be enough to convince small business and consumers to abandon earlier versions of Windows? Time will tell, but Microsoft has some substantial credibility issues to overcome.

By the way, for IT pros Zdnet has a free ebook written by Ed Bott: Introducing Windows 8.1 for IT Professionals. More on Win 8.1 can be found at Information Week and Technology Guide[divider]

The security breach was confirmed last week after Google’s “Safe Browsing” service blacklisted the site. The PHP group initially thought the warning was a false positive, but a more thorough investigation shows malicious JavaScript code was injected into one of the site’s files. That coded executed exploits from a third party website that, if successful installed a piece of malware on visitors’ computers.

According to PHP, two servers were compromised and all services on those computers have been migrated off. PHP will reset user passwords, has revoked their old SSL certificate and is in process of getting a new certificate. More at PHP.Net, PC World

While some may think of it as child’s play, 3D printing may be the beginning of a new paradigm for manufacturing, prototyping, computing and science. For example, NASA will be getting into the act by sending a 3D printer with its astronauts to manufacture (rather than haul) some of the tools they need. The pretty cool headphones pictured here at Wired were designed by Teague Labs’ John Mabry as a project.

According to Gartner, consumer and enterprise 3D printer shipments are growing at 95.4% and revenue at 81.9% from 2012 through 2017. Gartner predicts the 3D printer market will grow from $288 million to more than $5.7 billion by 2017. More at Techcrunch and Elite Daily

Mozilla releases Lightbeam an application that lets you know who is watching you online. When you activate Lightbeam and visit a website, this add-on creates a real time visualization of all the third parties that are active on that page. See more at Zdnet

Does walking alone at night give you the creeps? If you have a Smartphone, several new personal safety apps act as your guardian. Although most are subscription based, the small costs could be a real life-saver. One example for college students: Guardly Safe Campus. Others from TechHive are here.

The good news: it’s free and it further refines the OS. The other news: there’s nothing particularly stellar or innovative. See more at Techcrunch, Engadget, Cnet